Today we welcome Cape Tonian April Vine to the SA Romance blog. Her latest release, Intrigue in India, released a week ago through The Wild Rose Press, and she's visiting us today to talk about herself and this novel. I'll hand over to April ... 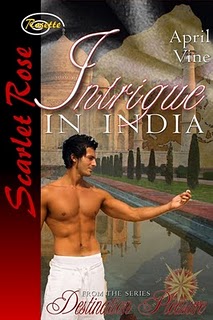 “All you have to do is disguise yourself, pretend to be me, go to India and meet the man I’m supposed to marry. By the time he realizes you’re not me, I’ll have already eloped…”

After a break up with her boyfriend, Haley Kent agrees to her best friend, Anjali’s madcap plan, hoping mystical India will help her find inner peace. Instead Anjali’s arranged future husband turns out to be a gorgeous Indian God with a touch that scorches.

Rajeev Yuvaraj refuses to be outsmarted by the sexy, blonde, blue-eyed American and devises his own retribution. A bride is what he expected and a bride is what he would get even if it meant handcuffing Haley to his wrist during the marriage ceremony.

But when Haley discovers the true nature of his secret scheme, can Rajeev seduce her back into his arms again?

She yanked the hand cuffed to his wrist. An unnecessary precaution to keep her from fleeing, as the opulent red and gold bridal sari she kicked and screamed her way into, the layers of pure gold jewelry and the tons of flowers threaded through her long blonde hair ensured she stayed rooted to the ground next to him.
She glanced up at him. “Yes, we deceived you, and I’m sorry for that. She had no other option out of this arranged marriage with you. Her parents watch her every move. She had no choice. But what you’ve done in return is unjustified.”
“Unjustified?” he asked, effortlessly hauling her up flush against his body. The impact slowed her senses, his cologne teased her nerves and his nearness suspended her breath. She swayed and his hand spanned the small of her back, keeping her steady. Her nipples hardened and liquid warmth spread throughout her body. She jerked away from him, her brows drawing together. What had come over her? She’d never felt faint a day in her life.
He tugged her back. “Impersonating my fiancée while she is traipsing the world with her lover and leaving me for the fool requires due payback, as you Americans would say. I expected a bride and a bride is what I will have. Again, it is within your power to end this immediately. Tell me where Anjali is.”
Haley shook her head, still feeling lightheaded—she blamed it on the situation, the Indian air. Not the man beside her.
Oh, Anjali, what have you gotten me into? Yet, betraying Anjali’s friendship remained out of the question. There had to be another way out of this marriage. She had to think, remain passive, let him think he’d won before she struck back and escaped.
“What is it going to be, Haley? This is your last chance. Freedom for Anjali’s whereabouts or…”
“Go to hell.”
“Indeed.” He smiled dazzlingly at her and then briskly instructed the priest to get on with it, in English, for her benefit no doubt.

Thank you so much for hosting me, Romy.


Congratulations on your new release, April.

For those readers who haven't yet checked out the latest copy of Essentials magazine, the winner announcement will be made in the August issue, available in stores at the end of July.

While we wait together, please feel free to de-lurk and let us know if you entered.

I entered two short stories this year, and I'm just as eager to see if I not only finalled but also which one of the two they might have preferred. It's hard to type with so many fingers crossed!
By Romy Sommer 3 comments:

Harlequin's new digital first division, Carina Press, has launched! Carina Press will be publishing all types of fiction (not just romance) from erotica to thrillers to speculative fiction. They're releasing a clump of titles each Monday in June, and from there out there'll still be a weekly release but probably with fewer new releases each Monday (at least until their stable of authors increases).

You can visit their e-book store at http://www.carinapress.com/ and the titles are also available at most sites where ebooks are sold, such as Amazon, Barnes and Nobles, etc

There is also a Carina Press Comminity at eHarlequin if you want to learn more about the authors, the types of books and ask any questions regarding subbing there.

I'll be spotlighting a few of the Carina Press authors on My Blog this month, starting today with Carrie Lofty. Carrie has also just sold a series to Pocket featuring a title set in South Africa, so if you've any questions, like did she have any trouble selling a SA setting, etc, please feel free to ask

This is a great new opportunity if you have a story to submit that doesn't tick the boxes of traditional publishing houses. I've just come through final editing stage with Carina Press and can contest to the fact that they are incredibly professional, their link to Harlequin's marketing and resources is tight, and the range of books they're looking at is impressive. I would definitely recommend Carina Press as a home to submit your story to  -  although that's just my personal opinion :)
By Claire Robyns 2 comments:

Vote for your Favourite Hero

Today we're doing what we love best... drooling over gorgeous men.  And voting on our favourite.

You don't have to pick just one, 'cause you know what they say (forgive the artistic licence): Love is like a box of chocolates, and there's no fun in being allowed only one piece of candy!

So, who's it gonna be?
That All American Guy with the too cool smile and sexy crinkly thing going with the eyes?
Or maybe the Hot Latino Lover with that sultry come-hither in his dark gaze?
Call me a cradle snatcher, but there's just something about that Wizard Next Door in all his boyish cuteness.
How about the Lord of The Manor, you know, the one with more arrogance than wealth and even more titles - and yes, he has to take a swim in the lake first!
And, ooh, our favourite blood-thirsting-but-no-sucking Soul-Torn Vampire. He has a soul. No he doesn't. Yes he does. Does it even matter when you look like that?
Last, but certainly not least, back in the days when men weren't scared to show their chests, we have our Warrior. (Sadly, this one's ready for battle, so no chests today)