The Thorn Among the ROSA's - Meet Peter Barker 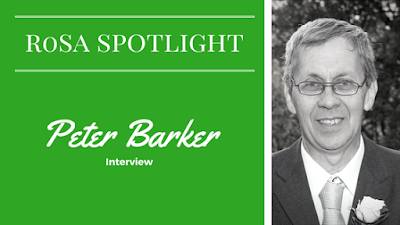 In an effort to really get to know each other, we thought it would be a good idea to publish a series of interviews with fellow ROSA members to learn more about who they are, what they've published and what makes them tick. We'd like ALL our members to feature, so please drop our chairperson, Romy an email on romy@romancewriters.co.za and she'll send you some questions to answer.


Today we put the spotlight on our treasurer, Peter Barker!

What is the last romance novel you read?

What type of Romance / what genre do you write?
Contemporary Romance

About to be published with The Wild Rose Press

What do you love most about writing?

A wonderful use of all my creative energies.

And what is your biggest challenge as a writer?

Finding the time to get to it.  I hope it will be a bit easier when I retire at the end of the year.

Do you have a playlist while you write?

A newspaper article by Carol Lazar in which she described how she and her husband had gone to  the
bar mitzvah of the son of a friend of theirs. After leaving the shul they went to their house for a party.  It was only when someone walked in carrying a tray of bacon kips that they realised they had gone to the wrong house. I shared this story with the ROSA members and someone said to me "There's an inspiration for your next book." and that is what it became.

What is your proudest achievement as a writer?
Getting published Yay!!

What advice would you give someone who tell you they want to write?

Have a passion for your cause. Believe unshakably in what you are doing, or give up writing.

If you could give your life / dreams / goals a hashtag, what would it be?

#To write-to write perchance to dream.   (no disrespect intended to William Shakespeare)

To share my art form with the rest of humanity

What is your writing schedule like - do you write every day / a certain time of day?

Any available time. I hope to get into more of a routine after retirement

When I decided to write, the first thing I did was to write a 50k word romance novel just to see if I could.  I was pleased to discover that I found it quite easy to create 1,500 words in an evening.  It is a lovely story and I may re-write it in due course. As it is it is full of technical errors, piles of "tell" instead of "show' as well as confusing points of view.

The friendship I enjoy with the other members as well as learning from the advice and experience of members who have been in the game longer than I have. 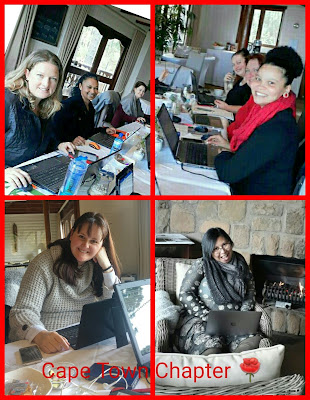 It was the weekend after a harrowing storm and deadly fires threatened the Western Cape and the Cape Town Chapter was in desperate need of tender loving care. What better way to forget disasters, life and every day stresses than uniting for a Romance Writing Day?

The location, Lalapanzi Lodge nestled in the picturesque town of Somerset West. Upon arrival we were warmly greeted with a motherly hug from Rose, the Manager. Phoenix Kelly coined it “Rosa Lodge” as it’s the second Rosa event held in its midst, the first being a Writing Retreat in February this year. 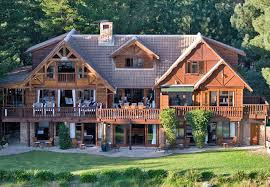 Since the success of the Writing Retreat, there was a call for Cape Town Romance Writers to connect and support one another. Many writers tend to write in isolation and feel cut off from the rest of the writing fraternity. It is believed that belonging to a support group is highly effective in creating a space to share fears, gain advice and attain individual goals.

Rae Rivers and Natasha Anders took the lead in arranging this Chapter meet. The order of the day was to provide an environment conducive to writing and bonding. Initially I wasn’t keen on attending a writing day in the heart of winter. It’s my least favorite season and I worried about getting cold, unable to get anything done. My doubts were unfounded when I walked into a warm and cosy dining area, a roaring fire going, interlaced with underfloor heating, making me feel like royalty. The view from the upper deck of the Lodge revealed Table Mountain in the distance hugged in clouds. The pitter-patter of much-needed rain was music to the ears and from time to time a rainbow emerged reminding us we were sitting in a slice of heaven.

It was fabulous to see familiar faces again, to catch up before the aim of the day began. Some writers were on deadline, moving into quiet spaces, determined to make use of the time wisely. I’m one of those writers who like to work alone and having to sit beside others seemed daunting at first. Again, my fears were misplaced as everyone was consumed with their stories and it didn’t take long before I too became immersed in my writing.

We gathered for a delicious lunch of open sandwiches, warm drinks on tap and light conversation. It always amazes me how supportive Rosa members are in helping newbies like me. From answering questions on research, writing software, giving advice when stuck – everyone was eager to share their knowledge.

The afternoon saw us getting down to more writing. Rose spoilt us with cups of steaming cappuccino’s and a special treat, milk tart and chocolate bars, chirping in the background, “It’s not called Rosa Lodge for nothing,” as we squealed with laughter. Just as I was truly in the creative zone, the day had come to an end and most were packing to leave.

I was sad to depart the warmth of the lodge, to bid farewell to all. But I was beaming because I had a productive day spurred on by the collective energy of fellow Romance Writers. Reading the messages on the Whatsapp group later the evening, we unanimously agreed the writing day was a hit, with talk of another well on the cards.

You can follow Sumi on her blog: The Sweet Life of Sumi Singh

By Unknown No comments: