I pitched up at ROSAcon 2019, on the first morning, not knowing what to expect. I was a bundle of nerves, wondering whether I was in the right place for a writer starting out. By the end of the last day, during the last session, I realized that I didn’t want ROSAcon 2019 to end. Sadness filled me as the event drew to a close. It was by far one of the most thrilling, fascinating, awe-inspiring workshops/conferences I’ve had the pleasure of attending.

ROSAcon 2019, was in a sentence, absolute fun while learning.

I left swimming in information (perhaps drowning would be a more accurate description as there was so much of valuable info shared over those two days) that more seasoned writers openly gave without reserve.

There was a genuine sense of camaraderie and encouragement.

Each session was conducted by book professionals and authors filled with passion for romance writing and wanting to help others, from beginners, like myself, to those further down the line in their writing careers.

Highlights of the event for me were the panel discussions, in particular ‘The Biggest Mistakes We’ve Made’, in which established authors spoke honestly about their writing journeys to the point of success. It was nice to hear their own personal accounts and know that even accomplished authors start with nothing but a manuscript and hope, and that blunders along the way are common, and that you just need to be brave and push along fearlessly.

Dani René, Ashleigh Giannoccaro, Romy Sommer, Suzanne Jefferies, Whitney Ross, Sharonlee Holder, to name a few, all shared their best secrets to a thriving writing career. In fact, everybody I spoke to at the event had something of value to impart.

I could not believe that I had landed smack bang in the middle of romance writing heaven, surrounded by enthusiasts like myself.

Next year I will be first in line to book my ticket. ROSAcon 2020…can’t wait! 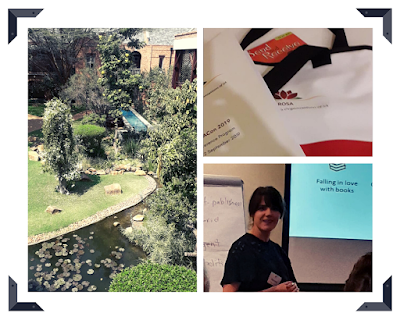