What does diversity really mean for you as a romance writer? Antony Ehlers explores this hot topic. 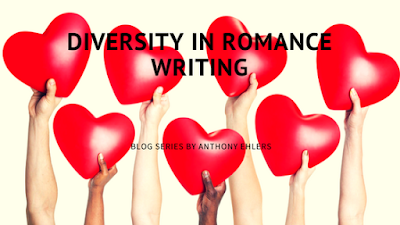 What does diversity really mean for you a romance writer?
In a recent issue of Writers Forum, a great UK writing magazine, there was a post on diversity in publishing. Tom Weldon, head of UK house Penguin Random House, spoke about the need for a change in the whole industry.

Across the spectrum
Diversity cuts across the spectrum. It includes race, sexuality, class, gender, age and identity – and so much more. We can all agree that we need to become more inclusive and open minded as writers. In fact, we have to do this if we’re to survive in a changing world, with an evolving readership.

So how do we do it?
This question has me stumped. It’s one we all have to try and answer. I grew up with modern romance books that were all about the tall handsome – and usually Caucasian – hero who was impossibly rich. The heroine was usually a secretary, a nanny, an heiress – and yes, almost always, Caucasian.

Dare I?
Recently, I thought about writing about an office-based modern romance where both the hero and heroine have the same position – they’re equal.  Immediately, I thought … can I do that? Isn’t that breaking the rules?
Yes. It is. And it’s time to break the rules. Maybe not break them all the time – but time to bend them. Challenge theme. Find your way around them.

Rewriting romance, rewiring your thinking
I think we all need to rewire our brains. It’s time to look outside of the curled-up covers of those books we loved in the 70s and 80s.  In a way they shaped us, but it’s time to let them go.  What does love look around you?  Take your cues from the real world, a little voice was telling me. Maybe I should listen to it.

Look at the media mirror
I love Alicia Key’s song Blended Family. The idea of family is being redefined – we have single moms, single dads, blended families.

I think this is a great idea to explore in romance. Both hero and heroine have kids from a former marriage or relationship. How do they make that work?

Right now, President Obama is leaving the White House. I’ve always found him to be charismatic and compelling.

In a story I’ve been working on, I had a female bodyguard protecting a bad boy rock star.  What if I made the rock star a handsome, rising black political star?  That would add diversity and it would do away with a cliché.

If you look at reality TV – a rich source of ideas – we have The Nightmare Neighbor Next Door. What if you wrote a working- or middle-class romance about two bickering neighbors who find love over the boundary wall?

I can’t see Mills & Boon snapping that one up, but maybe there’s a market for more ‘realistic’ romances out there. If not, why not create it yourself?

Look at your own life …
How has your own expectations of life and love changed?  If you’re young, it’s all about clubbing, and dancing, and having fun. It was for me, at least, and that’s fine – if you’re in your twenties, you’ll be writing about your own point of reference.

But what about when you get older? What do you want now? Give those same needs to your hero or heroine.

Maybe it’s more about building a life together built on shared interest. That sounds boring – but what if that shared interest is something out of the ordinary – like a new business, a charity, a shelter for abandoned exotic reptile pets?

Start with a new mindset …
There’s always an opportunity to bring diversity into your romance writing. It just means looking the world with a new squint – to see what’s out there in the real world, and amplify it, fictionalize it, and make it something extraordinary …

Be a pioneer, not a throwback …
In that same Writers Forum article, it mentions a UK study called Writing the Future. The study found that the UK book industry ‘risks becoming a 20th century throwback increasingly out of touch with the 21st world century world.’
It’s time to take on the Brave New (Diverse) World.
Who’s with me?

Anthony Ehlers
By Unknown No comments: