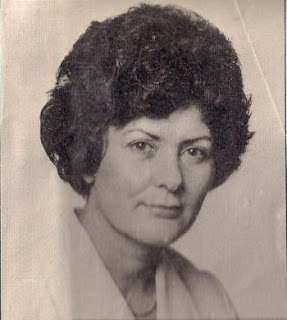 Last night when I heard on the news that Ena Murray passed away from natural causes my first reaction was, I’m not ready yet. I still wanted a world where she creates these wonderful books that grips the imagination. That transported me to adventures in the Amazon, Europe, Mozambique, Hawai and many more exotic locations. To read about pirates and noblemen who had their titles stolen by unscrupulous family.

When Romy Sommer asked me to do the blog for ROSA, at first I thought to research her life and where she was born etc. To try and give a detailed account of her life from the moment of her birth. But to me Ena Murray means wonderful stories so I will tell you a bit about her life but I want to talk mostly about her books. 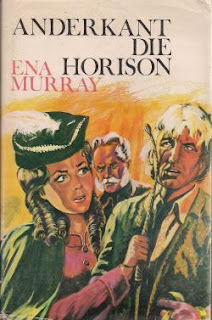 Ena Murray was born in Loxton in the Karoo on 27 December 1936, the middle child of three daughters. Her father was a doctor in Loxton and Ena Murray attended school in Loxton and Victoria West and then became a nurse after she matriculated. She married Boet Murray and they made their home in Loxton but after twenty years they divorced and she moved to the Wilderness in Southern Cape where she married Jaques Mostert.

Eventually they moved to a retirement village in Mossel Bay where he passed away five years later and she stayed on until she passed on 4 June 2015.

Two of her books were made into movies, Vrou uit die nag (Woman of the Night) and Plekkie in die Son (A place in the sun). The latter was the story of a leprosy shelter and a woman contracting leprosy and falling in love with the doctor working at the shelter. Revolutionary romance writing for the times. Ena Murray was well known for doing thorough research and not writing the story until she had all the details needed. She also wrote suspense and thrillers but are best known for her romance novels. I remember reading her books from age eleven and those same books are still best sellers. That takes some doing. 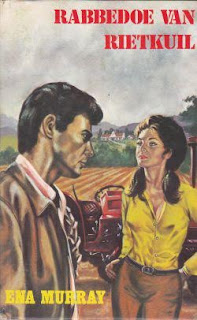 For some reason the first book I thought about last night when I remembered how much I enjoyed reading her books were Rabbedoe van Rietkuil (Tomboy of Rietkuil). I was about thirteen and read this book about a woman who went to work as a farm manager who at the end of the book turned out to be a glamorous socialite who fell on hard times and had to work to bring in money to save her family. Wow I was impressed. Imagine at a time when there were still discussions about whether your husband would one day allow you to work being able to read something like that. 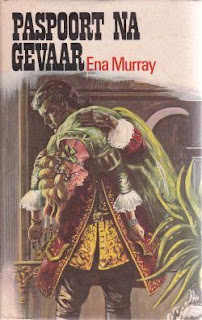 Paspoort na gevaar (Passport to Danger) was a Cape Dutch historical romance. I loved the period costumes and the bit that started in France. And as you can see from the cover of the book a rather forceful hero. My teenage self, thought him very dashing. Paspoort na gevaar is the story about Nicolette de Lille a French noble woman who make a marriage of convenience to get out of some trouble caused by her fiery spirit. She thought she would go back to France and forget about the rough free burger she married. I think you can guess how well that went for her. Have a look at the cover of this book and guess what happened to her plans to return to France.

Junior in saal sewe (Junior in Ward Seven) was one of my absolute favorites. I liked it so much I made my poor little brother and sister sit still for hours while I read it to them. This is the story about a young nurse who doesn’t have a boyfriend and fed up at being teased for not having a boyfriend she pretends she is secretly engaged. She regularly goes to visit one of her old patients and take a photograph of the woman’s grandson and show it to the other nurses. Except the photo turned out to be of the new head surgeon at and all her shenanigans to hide her lies are hilarious.

Eensaam op wegdraai (Alone on Wegdraai) is another story my brother and sister were forced to listen to and is the story of twins who make a plan when it looks as if their father want to marry their least favorite teacher. One who wants to make them wear dresses and sit around with their ankles crossed like little ladies. They place an advert on behalf of their father in a dating magazine and quickly get into a correspondence with the heroine of the story. I want to reread this one simply to see how they received actual letters and how things worked without internet and cell phones.

I can keep going until this blog is a hundred pages long and still have some Ena Murray books to talk about. She will be missed. 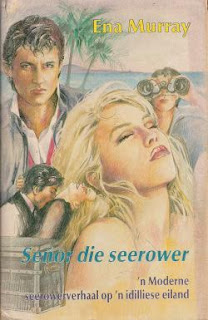 Peter's review of 'The Rewrite'

Thank you so much to ROSA member Peter Barker for this review of The Rewrite, the new romcom which ROSA Johannesburg were invited to view at an advance screening courtesy of Ster Kinekor:

One may be tempted to stifle a yawn at the arrival of yet another 'chick flick' featuring naughty boy Hugh Grant. The typical Romance structure Boy meets girl, boy dates girl, Boy and girl break up, boy and girl reconcile and all live happily ever after while the arch-feminist in the sub plot is able to stand her ground.

Whereas the arrival of THE REWRITE featuring Hugh Grant and Marisa Tomei soon to be distributed through the Ster-Kinekor chain falls into this category, it is worthy of a more stricter test. Firstly, does it entertain? Is it interesting, (or does it educate)? Finally does it inspire?

On all three tests it certainly meets the criteria. The story is based at a University campus where Hugh Grant as a washed up one hit wonder script writer is sent to teach screen writing to a class of university students. He is spotted by single mother mature student played by Marisa Tomei. Hugh Grant's character treats the job with disdain until his mistakes start to catch up with him. Marisa Tomei's character is in the background guiding him through towards the right choices. Youth and its uncertainties and enthusiasm which comes through the students in the screenwriting class certainly provide entertaining viewing. The story line is enlightening for aspiring writers and gives a perspective of what writing and getting material published is all about. It is not a writer's guide but it does illustrate some of the tricks and pitfalls of the trade. Finally, there is in the cast of characters someone for everyone to identify with. Enough material for everyone to be reminded that your dreams and ambitions are obtainable no matter what your background is.

For an evening's entertainment which albeit in a familiar genre, will leave you entertained, enlightened and inspired. THE REWRITE is well worth a visit to the cinema. 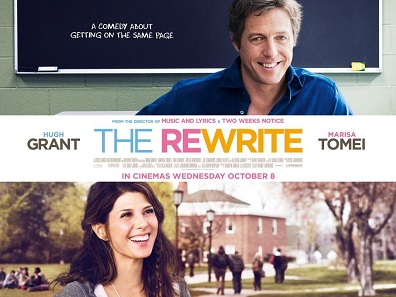