Following our highly successful first Strelitzia contest, the organisers and judges have some valuable tips to share with those considering entering in 2018. In my previous post, I shared the most important feedback we received: read the instructions!

In Part One of this series, I discussed our file formatting requirements, and why we have those specific guidelines for the Strelitzia contest. In this post, I'd like to look at the other requirement a lot of our contest entrants struggled with: the dreaded synopsis.

In 2017 a synopsis was only required for those only submitting the first few chapters rather than a completed novel. Believe it or not, that was us letting you off easy! Since many entrants would not have had time between the announcement of our contest and the closing date for entries to complete an entire manuscript, we figured we'd open up the contest to more entrants if they only had to write a 2 page synopsis, rather than another 200+ pages of book.

However, several entrants queried this, asking if they could submit their first few chapters only, but not submit a synopsis. One even opted not to enter at all because of the synopsis requirement!

The synopsis was a non-negotiable requirement of entry, and from next year will be mandatory for all entries.

While it is of course your prerogative not to enter due to the synopsis requirement, the only person you are harming is yourself. Yes, writing synopses is hard. But it is also an essential part of being an author. If you ever plan to become a professional author, you will need to learn to write synopses. Agents and editors require them, and you can’t query them and say “oh, but I don’t like writing synopses, so I haven’t sent you one.” (Well, of course you could do that, but you would be ending your career right there!) Even bestselling, multi-published authors still write synopses - this is how they sell their as-yet-unwritten books to publishers.

Agents and editors require synopses for exactly the same reason we do: to see if the author has a grasp on character development, to see if the characters’ conflicts are sustainable, to see whether the story will be satisfactorily resolved.

No matter how brilliant the prose of your opening chapters, if you do not have a handle on plot or character arcs, you may not yet be publishable, and you certainly should not yet be winning awards. Harsh, but true.

But the converse also applies. If you have a gripping plot, the characters have growth arcs, and the ending is sufficiently satisfying, many editors and agents will overlook a few mistakes and writing that still needs polishing, because they can work with you on polishing the writing to publishable standard.

So do yourself a favour, and write a synopsis. I can promise you, our judges at ROSA are a lot less critical and much easier to please than most agents and editors!

For those who struggle with writing synopses, bookmark this blog, as we'll be posting some helpful tips on how to construct a short 1-2 page synopsis in January 2018.

Feedback from the 2017 Strelitzia Contest: Part One

Following our highly successful first Strelitzia contest, the organisers and judges have some valuable tips to share with those considering entering in 2018.

The first bit of feedback might arguably be the most important: read the instructions!

The contest rules are not arbitrary. They are there for specific reasons, either to help you, to protect you, or to ensure that the contest is manageable and sustainable.

The requirement of this year's contest which was most frequently broken was the file format requirement. We asked that entries be submitted in Word format. At least half submitted in PDF format, which is a locked and uneditable format. We let it go in 2017, but going forward any entry not received in the requested format will be automatically disqualified, and the entry fee will NOT be refunded.

There are very two very valid reasons why we asked entrants to submit their entries in Word format. It is so that we can cut and paste the entries in order to:

I can only imagine that the entrants who submitted in PDF either (a) did not read the submission guidelines, (b) were afraid that ROSA and its judges would otherwise steal the entrants’ work. I'd like to address both concerns.

(a) Not reading submission guidelines is a serious career faux pas. Through your career you will no doubt be submitting your manuscripts many times over to agents, editors and contests. If you do not read and exactly follow their guidelines, you are putting yourself at a serious disadvantage. Most agents will not even consider a submission that hasn’t followed their guidelines.

(b) On the second point, we are a professional organisation, and our judges are career professionals who are already successfully writing their own books. They do not need to steal your work. Furthermore, all our judges sign a contract before they are sent any entries, which clearly states that the copyright belongs to the original author (there is a similar clause in the Ts & Cs for entrants). We have a record of every entry we receive, and we keep track of who is sent what, so in the unlikely event that any judge is unprofessional enough to steal your words, you (and ROSA) would be able to prove plagiarism very easily, which would end that published author’s career. However, if you are still of the belief that the published authors within ROSA are potential plagiarists, then I suggest you do not submit your entry to our contest. In fact, to be truly safe, don’t submit your work anywhere, ever! (Since it's way more likely that you'll be plagiarised after you're published!)

In my next post, I'll look at another contest requirement that appeared to be a stumbling block for many of our entrants: the dreaded synopsis.

On the evening of Saturday 21 October, at the ROSA gala dinner in Johannesburg, winners were announced for the various contests run by ROSA this year.

The first prizes awarded were for the Conference Scene Contest. This is a contest open exclusively to delegates attending the annual conference, and this year's theme was That One Night. We received seven entries. One entry, a scene from Rae Rivers' book Declan, received an honorable mention for its excellent and engaging writing, however since this book has been professionally edited, I decided to take that out of the running.

Which left three entries that were not only well written, but also matched the theme requirement. The prize was therefore split two ways, and a third prize, donated by Tule Publishing, was also awarded. The winners, in no particular order, were Elaine Dodge, Cliffordene Norton and Gene Mathey. 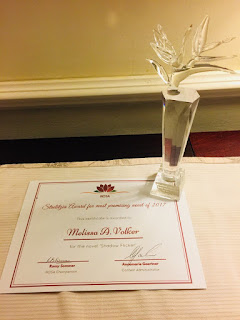 We then announced the winner of the inaugural Strelitzia Award. This contest, open to unpublished authors, received seven entries. One entry stood out head and shoulders above the rest, and the judges were unanimous in their decision.

The winner was announced as Melissa Volker, for her complete novel Shadow Flicker. As Melissa was unable to be present, the award was accepted on her behalf by last year's winner, Suzanne Jefferies. We wish Melissa the best of luck and hope she has great success with Shadow Flicker.

In the coming weeks, ROSA will be announcing the revised guidelines for next year's Strelitzia Award, as well as feedback from this year's judges to help aspiring authors prepare their entries - so watch this space! 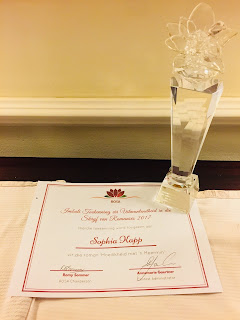 The other award making its debut this year, was the Imbali Award for best Afrikaans romance novel by a South African author, published between January and December 2016. We received eight entries for this category, all of which were of a very high standard.

The winners were announced as:
Winner - Sophia Kapp for her novel Moelikheid met 'n Meermin
Runner-up - Dina Botha for her novel Vind Mekaar

As Sophia Kapp was unable to be present, the award was accepted on her behalf by ROSA's outgoing Deputy Chairperson, Rebecca Crowley.

We were also very honoured to have several of the Afrikaans Imbali judges present at the gala dinner and prize giving. The Afrikaans judges' support was incredible! 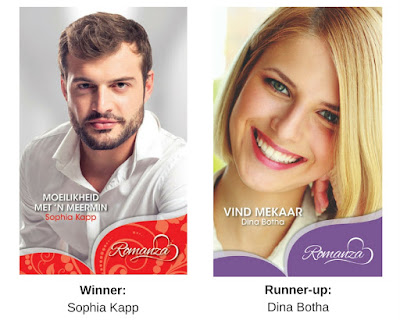 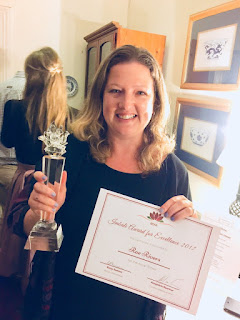 The final award to be presented was the Imbali Award for best English romance novel by a South African author, published between January and December 2016. We received nine entries in this category, some traditionally published and some self-published.

Rae accepted her award and made a short but heartfelt acceptance speech. 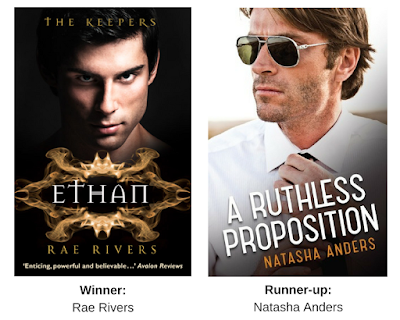 Check back here on this blog in coming weeks for tips from the judges as well as the announcement of next year's contests.