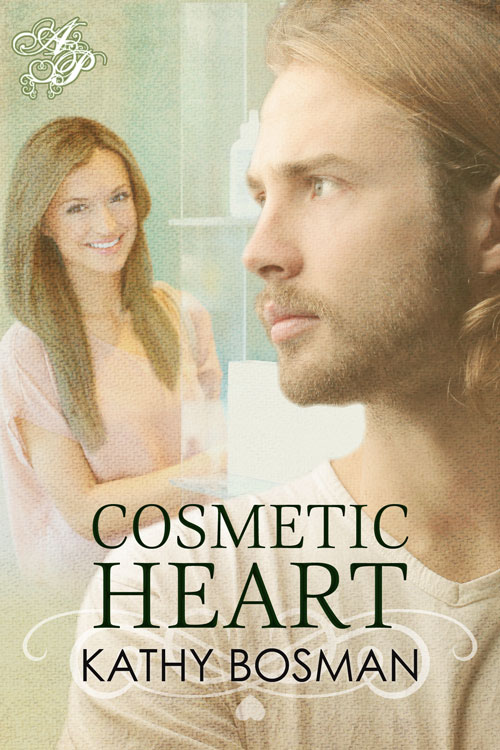 My Nano novel from 2012 obtained me a contract in December. This was the fastest book I ever wrote. Of course, it needed a good edit.

Cosmetic Heart is a contemporary romance about a make-up artist who dreams of becoming a journalist for a lady's magazine. Lisa hides behind a shell of ordinary but dreams of more. Her family are all in top careers and very focused, making her feel like the black sheep.

Daniel Loriet, the chief editor of the magazine where Lisa works, has had bad luck with women. Or maybe he's made some poor choices in his life. He's flitted from one relationship to another and never settled down. He's joining his family for a New Year celebration but they think he's still engaged to his ex-fiancee who ditched him for no valid reason. Not wishing to look like the loser lover in front of his family again, he asks Lisa to pose as his fiancee after having a hairdo and buying new clothes. Lisa looks similar to her and can do tricks with make-up. He offers her a reward - any reward.

Lisa asks if the promotions policy at the magazine can be changed in exchange for going along with his plans. Maybe, just maybe she can get to write after all.

When she goes with Dan to a small place in Northern Cape called De Aar, she soon learns that he's very different away from work and the rumours she's heard floating around work about him. His family are so welcoming. Thus begins a tumultuous romance as Lisa has issues. Major issues. She's never wanted a serious relationship before. Can Dan change that? Can she let go of the secrets she's hiding from him and can he forgive her when he finds out?

Here's an excerpt from my novel:

It was Thursday, the 30th December, and Dan was rounding
off some edits on an article for the February magazine. Kate, the
feature editor, needed to come up with something more unique
next time. It was too late to change the piece now — okay, maybe
he was too tired to bother, and he had the next week to get
through. He would worry about her story once the reunion was
over.
Lisa still hadn’t had her hairdo. Would they have to lie about
her drastically changing her hairstyle to outdated and unsuitable?
He sighed. She was proving to be quite interesting though. He’d
rummaged through the bag of presents she’d wrapped and left in
his office this afternoon before she knocked off. They were
beautifully decorated with ribbons and cards, written neatly in her
curly handwriting style. He’d opened the one card and read it,
astounded at how she’d written the verse to a poem before a quick
“happy Christmas” wish. The woman was into detail. Maybe his
family would approve for once. They’d have to get used to the idea
that the relationship would end eventually though.
Someone knocked on his office door. Lisa, at last.
“Come in. I thought you were finished work hours ago.”
She smiled at him and then propped her hands on her hips.
“So?” She gave a sigh — loud and raspy. “Typical male!”
He gasped. “You had it done finally. Looks great!” Looks
more than great. Wow, transformation.
“Thanks.” Her smile was genuine and soft. That was the first
time he caught a glimpse into the real Lisa. Maybe she was starting
to thaw. Finally.
“Come here.”
“Why?”
“Just listen.”
“Okay.”
“No, don’t get that employee-boss look in your eyes. Try to
relax and pretend that we actually belong together.” He took her by
her stiff shoulders and pulled her into a hug.
“It’s like hugging a statue,” he whispered into her ear. Her
soft hair brushed against his tongue. He pulled the strands away
gently with his finger and accidentally touched her cheek with his
lip.
She stepped out of his grasp. “I don’t know if I can do this.”
She craned her neck around frantically at the doorway.
“Everyone’s gone home.”
“So?”
“You love that word.”
She giggled.
“Okay, if not a hug, let’s try a kiss.”
Her eyes were wild.
“Have you ever been kissed before?”
She nodded numbly.
“Too bad. You have to grin and bear it. I can’t be that bad.”
He reached for her hands, pulled her close and pressed his
lips to hers. Sweetness flooded his being, spearing right into his
inner core. What was inside this girl’s being that surged into his?
Even though her lips were unresponsive, he kissed her further.
Then he pressed her chest against his. For a moment she stiffened,
and then she relaxed, obviously realising there was no way out and
she had to play along with it. But he wasn’t playing anymore. This
was for real. He wouldn’t tell her that though. That would make
her run a mile.
She pulled away and turned around, wiping her mouth with
her hands.
“Not bad,” he teased.
“I’d better get going now. I’ll see you in the morning.” Her
voice was shivery.
“Have you packed yet?”
She nodded, her back to him still.
“See you then.”
She was out the door without showing her face once. The
back of her head was gorgeous. That hairdo did something to her
whole demeanour. If only it would warm her up to him a little.

You can buy Cosmetic Heart at the following links:
Astraea Press
Amazon
All Romance Ebooks
Barnes and Noble
Smashwords

I'm giving away a PDF copy of Cosmetic Heart to one lucky person who comments on this blog post. If you win my book, I would be thrilled if you wrote an honest review on Amazon for me.
By Kathy Bosman 3 comments: