Marie Dry focused on the issue of Goal, Motivation and Conflict (GMC) in her session on Sunday 26 October 2014.

She reported that she found the following pairing helpful:
Goal (Wants) → Motivation (Because) → Conflict (But)

Marie stressed the need to remember who your character is when determining GMC, and suggested having multiple goals which should then crash into each other. She also advised writers to dig deeper rather than to pile. Instead of just adding more elements to your story when it starts to sag, she suggested digging deeper into the plot and characters with GMC in mind to find something that works. 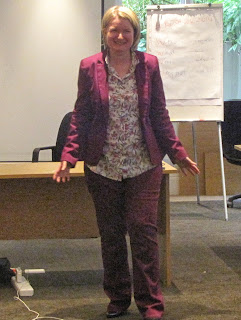 She suggested starting with internal motivation first and then adding external motivation. Goals don’t necessarily have to be opposing; conflict arises in the way characters achieve their goals. The strength of your book is your conflict, she said, suggesting that writers need to lay in a foundation for conflict, create believable goals, motivate characters, and nurture the conflict to the inevitable crisis or climax.

Marie also emphasised that coincidence, bickering and misunderstanding are not conflict. She suggested doing a GMC chart for each character, as this will ensure that they have a solid reason for being in the story.