With the Oscar Pistorius trial shining new light on the frequent failings of SAPS's homicide detectives, what better time to read about another, better aspect of South African law enforcement?

Yesterday my first release from Samhain Publishing hit digital shelves! SECURE TARGET is a romantic suspense featuring a sexy South African super-cop, a member of the Special Task Force, SAPS's elite tactical unit. Hailing from the Western Cape, Afrikaans-speaking Sergeant Bronnik Mason finds himself halfway around the world as he pursues an evasive serial killer. He’s sworn to bring him down at any cost, but when it comes to safeguarding the killer’s next target – beautiful Lacey Cross – Bronnik realizes this case could put his professional boundaries to the test.

This book was inspired by my first-ever trip to South Africa, and is set partially in Cape Town! I hope it paints a slightly more optimistic picture of South African law enforcement than we usually see in the news. Read on for an excerpt and all the links you need to find Bronnik and Lacey on the web! 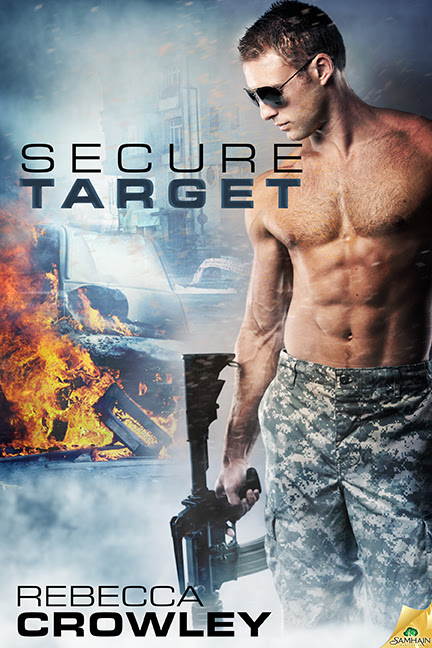 Lacey wasn’t particularly tall—maybe about five-five, Bronnik estimated—but when she emerged from the bathroom in her running shorts, he suspected at least half of that must be leg. With her thick, shiny hair pulled up high and a tight tank top completing the outfit, he briefly wished Hardy would choose a victim who was less likely to give him inappropriate dreams.

“Let’s go,” he said gruffly, preceding Lacey into the corridor. The Beretta was strapped to the inside of the windbreaker he’d worn over his T-shirt, and he touched it lightly as he checked the hallway.

“We’ll take the back stairs.” He put his hand on her elbow, moving in near enough that her hip brushed his thigh. Keeping her close to his side was an essential safety measure, but he found the intoxicating, fruity scent of her shampoo irritatingly distracting.

When they turned a corner in the hallway, a stout, older woman in a blouse and long skirt came trudging toward them. Bronnik slid his left arm across Lacey’s back, pulling her tightly against him.

His right hand tensed in readiness to draw his weapon as they approached the woman, at whom he smiled broadly.

She returned his smile and continued past them.

“What are you doing?” Lacey whispered hotly, wriggling at his side. Satisfied there was no threat, he let her go.

“Hardy loves a disguise. In Italy he dressed as an office cleaning woman.”

Lacey’s expression was indignant. “I could feel your gun,” she spat.

“My apologies,” he replied dryly. “Next time just let me know which weapon you’d prefer I use to defend you against a serial killer. I could ask the front desk for a free toothbrush?”

Lacey crossed her arms sulkily, which he chose to ignore.

The hotel’s fitness center was a small room at the top of the tall building, with a handful of cardio machines and a single rack of weights. One wall was composed of floor-to-ceiling windows, which the treadmills faced, however the view was only of the roof of the low-rise strip mall across the street.

Lacey hopped on one of the treadmills and plugged in her earphones. Within seconds she’d cranked the machine up to a speed he had to admit was impressive, and he could just make out the sound of the music pumping from her iPod.

Bronnik slipped off his windbreaker and arranged it on the treadmill’s control panel so the Beretta was concealed by the jacket, but its butt emerged slightly into easy reach. The gym was empty, and the combination of the darkness outside and the fluorescent lighting inside gave the window in front of him a degree of reflection, so he could see if anyone came in the door behind them.

As satisfied as he was going to be, he punched a brisk speed into the machine and began to jog. Although the doctor had cleared him to return to exercise two months earlier, he still felt a slight tugging at the scar on his left side. He cursed inwardly—it seemed like there was no aspect of his life Hardy wasn’t intent on screwing up.

He rolled his shoulders, willing himself to loosen up, to step away from the tension and paranoia for just a minute. He thought about the ocean-side path where he ran in Cape Town, a strip of pavement between the road and the sea. Luxury sea-view high-rise apartment buildings lined the far side of the road, but on the path there was only a railing between the sidewalk and the rocky coast. Outside the snow had finally stopped falling, and he focused on remembering the salty sea air that often gusted over that railing. Waves crashing against the rocks, flocks of birds alighting from the scrubby trees, the muted tap of his footfalls in the early hours of the morning, the hours when all of the crime and violence that marred his beloved homeland weren’t yet his responsibility, and he was free to run, to revel in the raw, unapologetic beauty of South Africa.

He was so consumed by his thoughts, he almost didn’t notice the slight movement on the roof of one of the stores in the strip mall—but just as on his morning runs, on some level he was always alert to danger. He squinted into the darkness, one hand resting on his weapon, when the glint of metal in the dim light of a distant streetlight set alarm bells clanging through his mind.

“Down, down!” he shouted, and tackled Lacey to the floor just as the bullet hit the window.
By Rebecca Crowley