Elinor Glyn - the 'It' Girl of '20s romance writing 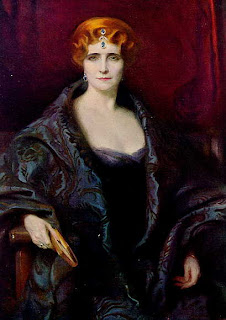 A handsome young Englishman enters his sedate Swiss hotel room only to find an exotic Balkan queen stretched out on a tiger skin with a lush red rose clamped between her teeth, just waiting to seduce him into a marriage of convenience.

She coined the popular expression ‘It’, that elusive and alluring quality of absolute sex appeal. ‘It can be a quality of the mind or a physical attraction,’ she said and these beguiling properties were bestowed on ‘20s actress Clara Bow, forever remembered as the ultimate It Girl in a movie of the same name. Hollywood gossip has Glyn reportedly teaching Rudolph Valentino how to kiss while he filmed Beyond the Rocks with Gloria Swanson, a movie based on her 1906 novel.

She was born Elinor Sutherland on 17 October 1864 in Jersey on the Channel Islands, but her family moved to Canada when she was a baby. She was brought up by her grandmother, of Anglo-Irish aristocracy, who instilled in her a sense of style and upper-class breeding. With her green eyes and flame-coloured hair, Glyn could easily have been a character in one of her own scandalous books.  After her marriage to wealthy but spendthrift landowner Clayton Glyn hit the rocks, she took to having affairs with various English aristocrats. In fact, Three Weeks was rumoured to be inspired by her affair with Lord Alastair Innes Ker.

She died in London on 23 September 1943. In 2002, Johanna Lumley played the novelist in the film The Cat’s Meow, as a guest on tycoon William Randolph Hearst’s yacht the night Thomas Ince died. Her career as a novelist is now largely forgotten and, reading her books out of historical context, her prose seems positively tame. However, Elinor Glyn pioneered mass-market women’s fiction in the early 20th century and she was one of the first female directors in early Tinseltown.

Elinor Glyn is just one iconic romance novelist of our times. Which author has most influenced your career as a writer?
By Anthony Ehlers