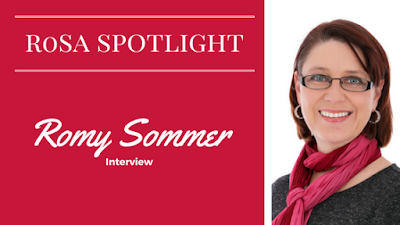 In an effort to really get to know each other, we thought it would be a good idea to publish a series of interviews with fellow ROSA members to learn more about who they are, what they've published and what makes them tick.

We'd like ALL our members to feature, so please drop our chairperson, Romy an email on romy@romancewriters.co.za and she'll send you some questions to answer.

And speaking of our Chair, to kickoff our ROSA Spotlight Interviews, here's Romy Sommer.


What is the last romance novel you read?

What type of Romance / what genre do you write?

I have 11 novels and novellas published. My first three novellas were originally published by The Wild Rose Press, but I’ve subsequently re-released them on my own, and my four contemporary romances are published by HarperCollins. I’ve also self-published under another name.

The book I currently have out on submission began as fan fiction. I never thought I’d be the person to write fan fiction, but it was a fun story that was never intended to go anywhere, just a diversion when ‘real’ writing was stressing me out. For the first 4 years it was saved on my desktop as ‘Just for fun’. In the six years since I started it, it’s grown very far from that original story and has taken on a life of its own. I really hope this story finds a home with an editor who will love it as much as I do!


What is your proudest achievement as a writer?

Being nominated for an RWA Rita award. Knowing how stiff the competition for that award is, and that as a peer review award it’s even harder to win over other authors, this nomination was a massive honour for me.

What advice would you give someone who tells you they want to write?

Don’t quit! The writers who are published are the ones who never gave up.

I would keep on writing regardless, but the one thing that keeps me motivated is the dream of doing this full-time. Until I have dozens of books out there, all earning, some winning acclaim, I’m not giving up!

The first love story I wrote was actually two parallel stories about two women whose lives intersect even though they don’t meet until the very end. I didn’t even realize it was a romance until my friend (and co-ROSA founder) Mandy read it and told me I had a ‘voice for Romance’. I went out and bought a pile of second hand romances to find out what she meant, and I’ve been hooked ever since.

The fact that ROSA even exists! Once upon a time, this organization was nothing more than a figment of my imagination. It astounds me how far we’ve come!