Excerpt from 'The Trouble with Mojitos'

This week's excerpt is from the ideal summer holiday read, The Trouble with Mojitos.

For those headed back to work tomorrow, this light-hearted romance will help keep that holiday vibe going. For those of you still on holiday... Shush, I don't want to hear it!

Juan brought two big earthenware platters to their table, filled with huge grilled lobsters, shelled and fresh from the barbecue, served on a bed of rice.
Kenzie licked her lips. “And what are these?” she asked, pointing at her plate.
“Plantain chips. They’re like bananas – sweet.” Rik lifted one off his plate and held it to her lips.
Her gaze held his for a fraction of a second before she opened her mouth and took a bite.
“Are you flirting with me?” she asked, once she’d swallowed it down. He was right, it was sweet. Better than plain old potato chips back home.
“Of course. Isn’t that what one does when on a date with a beautiful woman?”
She choked on the plantain chip. “This isn’t a date!”
“It isn’t?” His eyes held that dangerous glitter again. “Dinner, moonlight, pretty woman...sure looks like a date to me.”
“Yeah, but I’m leaving in three days.”
He grinned. “What difference does that make? It’s just a date, not a lifelong commitment.” The way his face pulled at that thought, she could guess what he thought of lifelong commitments.
“I don’t do one-night stands,” she said, as haughtily as she could muster.
No, she had a tendency to throw herself into long, complicated relationships and lose her heart and a piece of herself in the process.
And pick up a reputation.
She concentrated on her lobster and pretended that the idea of getting down and dirty with Rik wasn’t giving her hot flushes.
He leaned back in his seat and eyed her. “I’ve never had a one night stand either, but there’s always a first time for everything.”
A man who’d never had a one-night stand? Yeah right, and pull the other leg.
Her mojito glass was empty. She chased down the last of the lobster with Rik’s untouched drink.
Perhaps it would be different if she just indulged her body for a change, and kept her heart out of it. Perhaps a one-night stand was exactly what she needed.
Three days...that wasn’t enough time to lose her heart. Right?
The hot flush headed south. She pressed her thighs together, but that only made it worse.
No, she couldn’t. She’d sworn a vow. And that mischief in Rik’s eyes definitely put him in the ‘off limits, avoid-at-all-costs’ category.
“I think you should take me home,” she said. Her voice was hoarse. She cleared her throat.
“That was easier than I expected.”
She choked again. “I mean...I need to work tomorrow...”
He grinned and rose. “I know what you meant.”
Rik dropped cash on the table, then moved to hold her seat for her to stand. Such old-fashioned manners did nothing to ease her erratic pulse. Why couldn’t he be a straight-forward jerk and make it easy on her?
Juan waved them out the restaurant with another beaming smile, and then they were back on the boat which suddenly seemed even more intimate than their table at the restaurant had been.
While Rik guided the boat out of the harbour, Kenzie lounged back on the bench, no longer caring that her dress rode up and flashed way too much thigh. She was rewarded by his lingering gaze on her legs.
Good. She hoped his pulse was just as affected as hers. She hoped she drove him just as crazy as he drove her.
The coastline of Los Pajaros shimmered with magic in the dark, tiny fairy lights glittering between the trees, the beaches edged with dancing phosphorescence.
But the real magic show was above. She leaned back on her elbows and looked up. She’d lived close enough to London all her life that the sight of the Milky Way was still a treat. That was one of the best perks of her job – it took her to places where she could escape the light and noise pollution and actually see the stars.
This night sky was a hundred times better than any she’d seen, and she’d travelled enough to have seen a lot of impressive nights.
A balmy breeze stroked over her bare limbs. Her skin felt more alive, almost electric.
Los Pajaros had awakened her senses. Every colour seemed brighter, every experience deeper. The lazy heat that caressed her skin, the rich scents, the tastes…sweet and tart melting together.
And she definitely felt hungry for more. Of everything.
It was as if she’d been only half alive before, and here she was awakened, a new person, a better person.
This sense of possibility was familiar, it was that feeling she’d had as a child, that sense that she could have anything, do anything, be anything. She closed her eyes and breathed it in. She wasn’t a screw up. She was a young woman with the world at her feet, and a future, not just a past.
Today could be the beginning of a whole new life. 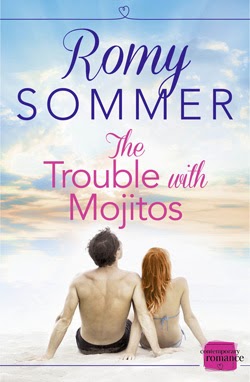 Turquoise blue waters. Sandy white beaches. Mojitos... Film location scout Kenzie Cole has found herself in paradise. Working in the Caribbean for a week is just what she needs to escape the long line of exes in her closet. Though the last thing she expects is to be picked up at the resort bar by a disgraced former Prince!

Luckily for Kenzie, exile is suiting the man formerly known as Prince Fredrik very well. And it’s not long before his rugged, pirate charm is proving hard to resist.

But Rik’s been spending his time in paradise exorcising demons of his own and he has danger written all over him. If Kenzie was sensible she’d run a mile instead of lose herself to lust - although, they do say sometimes you have to get lost before you can be found....


The Trouble with Mojitos is published by Harper Impulse, a division of Harper Collins, and is available from the following online retailers: Amazon, Amazon UK, Barnes & Noble, Kobo, iTunes and All Romance eBooks.