The Trouble with Mojitos

I love the research part of writing, the excuse to spend hours surfing the internet and calling it work. For my latest novel, The Trouble with Mojitos, my research took me onto luxury yachts, Caribbean beaches, drinking cocktails in tiki bars... yeah, it's a hard job, but someone's gotta do it.

You can't research the Caribbean without reading about sea turtles. The fictional cursed island of Tortuga in The Trouble with Mojitos is named for these amazing creatures - survivors of the dinosaur era, and yet the scary thing is that every year there are fewer and fewer of them.

As an author my key aim is to entertain. With all the unhappiness in the world, if I can help someone escape from the realities of everyday life for just a few hours and bring a smile to the reader's face, then I'm happy.
But let's face it, writing words that other people read is also a fantastic opportunity to share the things that are important to us.
Saving the sea turtles from extinction is important to me.

So I wrote a scene into The Trouble with Mojitos in which the hero and heroine watch a turtle hatching. I'm more than a little jealous of them, as this is something I've only seen via YouTube - though it's definitely on my bucket list. If you're in South Africa and would like to experience this for yourself, the area around Rocktail Bay on the Kwazulu-Natal north coast offers sea turtle safaris.

For those who, like me, have yet to see this amazing spectacle for real,here's a YouTube clip that will have you 'oohing' and 'aahing'. 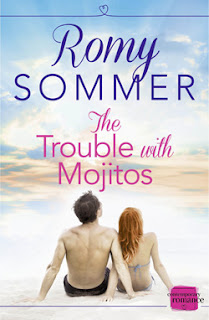 Turquoise blue waters. Sandy white beaches. Mojitos... Film location scout Kenzie Cole has found herself in paradise. Working in the Caribbean for a week is just what she needs to escape the long line of exes in her closet. Though the last thing she expects is to be picked up at the resort bar by a disgraced former Prince!

Luckily for Kenzie, exile is suiting the man formerly known as Prince Fredrik very well. And it’s not long before his rugged, pirate charm is proving hard to resist.

But Rik’s been spending his time in paradise exorcising demons of his own and he has danger written all over him. If Kenzie was sensible she’d run a mile instead of lose herself to lust - although, they do say sometimes you have to get lost before you can be found....


The Trouble with Mojitos is published by Harper Impulse, a division of Harper Collins, and is available from the following online retailers: Amazon, Amazon UK, Barnes & Noble, Kobo, iTunes and All Romance eBooks - and it'll be available in print too soon!