Our very own Rosalite: April Vine! 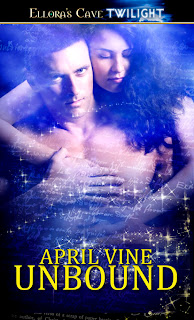 Staid and straitlaced Michelle Stein has two thoughts fueling her mind…
1. Floor the first man to walk into her antique shop.
2. Throttle her three witch-practicing aunts.

They promised her a tiny spell to fix her ridiculous inhibitions, but instead mischievously delivered a full-blown, sanity-squashing lust spell. The temporary curse apparently has no boundaries either…since the first man who walks through her door is the same man who broke her heart ten years ago. Despite Michelle’s vociferous resistance, Sebastian becomes the only man who can appease her unending physical hunger.

Michelle leaped from the floral-embossed Victorian chair, gripped the edge of the walnut desk and dropped her chin to her chest. Labored breaths somersaulted from her mouth. Her heart beat with swift speed. Her skin screamed under a raging fire.
She was having an attack.
Not a panic attack.
A sex attack.
Oh how she vowed to strangle her aunts, wring their collective witches’ necks and put them on a diet of cabbage for as long as they lived. She thought they’d agreed with her terms and stipulations.
Obviously not, since they’d turned her into a raging sex fiend who without any hesitation would attack the first man who walked through the door of her antiquities shop. Not by her own doing, because how could she, twenty-six-year-old, staid, even-headed and collected Michelle Stein, sign up for such reckless sexual abandonment? Not ever.
She resisted the urge to squeeze her scorching ******* and the temptation to bunch up her cotton panties and pull them taut against her ****. She couldn’t give in. Not while her door remained opened for business.
She wobbled out of her office to the entrance of the store. Pressing her legs together, she chewed her lip in agony as the slightest movement ricocheted spasms of pleasure through her body. Her eyes fixed on the gold-plated sign hanging on the inside of the glass door meters away from her. Her mission to flip it around and keep out any possible victims until the crazy her aunts bestowed upon her evaporated.
Too late.
The door swung open. Eighteenth-century chimes hanging from the paneled ceiling danced in the afternoon breeze. Their former melodious jingle a sex-alert siren in her ear now.
She zeroed in on a musky scent mingled with the clean, self-assured aroma of pure red-blooded male. Her senses hummed. She licked her lips then swerved to a dead halt.
Bedeviled with the worst kind of heat known to any man, woman or animal for that matter, and who chose to walk into her ordinarily sedate but presently doggoned world?
Sebastian Gray.
He who broke her heart in two.
“Glitterbug.” His gravel-and-silk voice spiked and inebriated her nerves. She tore her gaze away from his killer smile and stared into his wicked green-tinged blue eyes, which teased her the same way they did ten years ago.
Only one thought shot through her mind.
Oh dear, I’m going to molest Sebastian Gray.

[This excerpt has been edited due to Blogger age restrictions, however for the full excerpt you can read more here]

Unbound is available from:
Amazon
Amazon UK
All Romance eBooks
and direct from Ellora’s Cave